Lightning Network is Synonymous Bitcoin – These Blockchains Use it Too


The Lightning Network (LN) is a layer two protocol that operates on top of the Bitcoin blockchain. It is designed to enable near-instant, low-cost, scalable Bitcoin payments.

Lightning Network is often thought of as Bitcoin’s “scaling solution” because it has the potential to allow the Bitcoin network to process a much larger number of transactions than it does today. In this way, LN could help Bitcoin become a more widely-used payment system.

This layer 2 is being used by a growing number of businesses and individuals. As for how it works, it uses a network of “lightning channels” to facilitate transactions. These channels are established between two parties and can be used to send payments back and forth.

And once the channel is open, the two parties can make BTC payments without broadcasting them to the Bitcoin network. When they’re done, they can close the channel, and the final balance will be recorded on the blockchain.

While LN does have the potential to greatly improve Bitcoin’s scalability, it is important to remember that LN is a complex system and is still in its early adoption stages with a capacity of over 5,200 BTC. Also, more and more Bitcoin is being introduced to LN payment channels worldwide, which is now close to 76,000.

The introduction of layer two protocol Lightning Network presents possible solutions to blockchain scalability problems and security risks as it reduces the load on the main chain and enhances privacy by not broadcasting all transactions to the public.

As a result, besides Bitcoin, this technology is being adopted by several blockchains like Decred (DCR), Litecoin (LTC), Raiden Network (RDN), Zcash (ZEC), and Bolt (BOLT). These projects have all been actively working on Lightning development as it allows these networks to face most networks’ challenges with scalability issues while still implementing network features.

Litecoin creator Charlie Lee has been a strong advocate for LN adoption. And in 2017, Litecoin’s SegWit upgrade was instrumental in the subsequent implementation of the LN protocol. This helped the blockchain network experience even faster transaction speeds and lower fees.

With Litecoin being a fork of Bitcoin, implementing Lightning Network into Litecoin follows a similar process to Bitcoin.

Lightning Network implementation in both Bitcoin and Litecoin also enables the ability to swap cryptocurrencies between the two networks. With LN, modified atomic swaps allow users to exchange crypto between off-chain payment channels rather than on the mainnet, which are again faster and cheaper than traditional atomic swaps, making crypto interoperability more feasible.

Often called the silver to Bitcoin’s gold, Litecoin, is currently preparing for its July 2023 halving. Halving is a process in which the Litecoin miner block rewards will be cut in half. Currently, the $6.5 billion market cap coin is down 78% from its all-time high (ATH) from a year ago.

Besides the halving, Litecoin saw significant network enhancements in the form of the MimbleWimble Extension Blocks (MWEB) update, which aims to make it more secure for private transactions and boost the token’s performance.

Additionally, with over 170.5 million total addresses, Litecoin has surpassed Ethereum, and Litecoin wallet adoption has reached an all-time high. 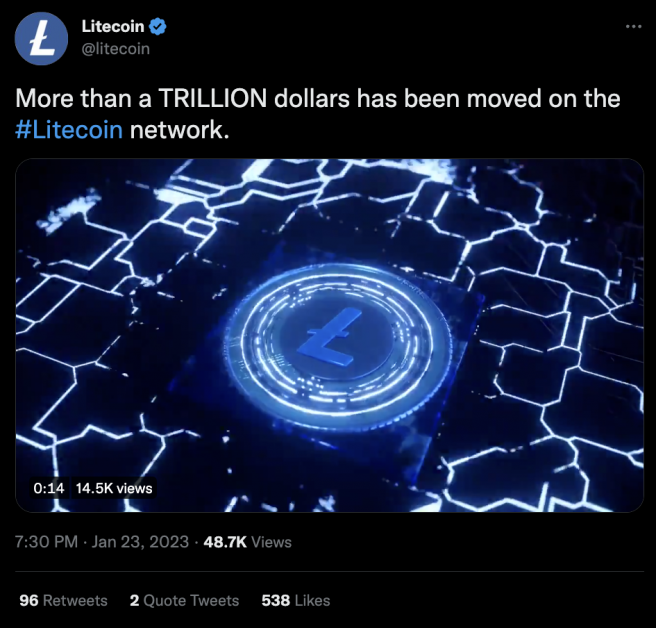 Click here to learn all about investing in Litecoin.

The privacy-focused cryptocurrency Zcash, which allows users to transact without compromising their privacy through a shielded pool, enables its users to open payment channels and send payments quickly over the Lightning Network.

Based on the Zerocash protocol, Zcash uses zk-SNARKs, “Zero-Knowledge Succinct Non-Interactive Arguments of Knowledge,” to improve the Bitcoin protocol. Zk-SNARKs is a complex mathematical protocol that allows two parties to exchange information without revealing anything about their identities.

One of the most popular privacy coins, the market hasn’t been favorable to ZEC price, which is down 98.5% from its ATH hit six years ago in October 2016, when it was first launched.

But with the increasing scrutiny from regulators worldwide, people are looking for more privacy which means privacy coins like ZEC can gain adoption in the future.

In 2022, the project noted that it made history with Zcash’s most recent network upgrade, NU5, while the community further decentralized as Zebra nodes went live on the mainnet, strengthening network resilience.

Click here to learn all about investing in ZCash.

This is done by implementing zk-SNARKS into every payment channel. Furthermore, Bolt uses commitments to ensure that payments made over the same payment channel cannot be linked, even by transacting parties. Users can hide the value of transactions using commitments.

BOLT’s price, meanwhile, has been down over 93% from its ATH in April 2021. Last year, the project announced a partnership with Binance as part of BOLT Global’s multimedia launch. They also teamed up with MoonPay to enable users to buy cryptocurrencies in the BoltX Wallet. 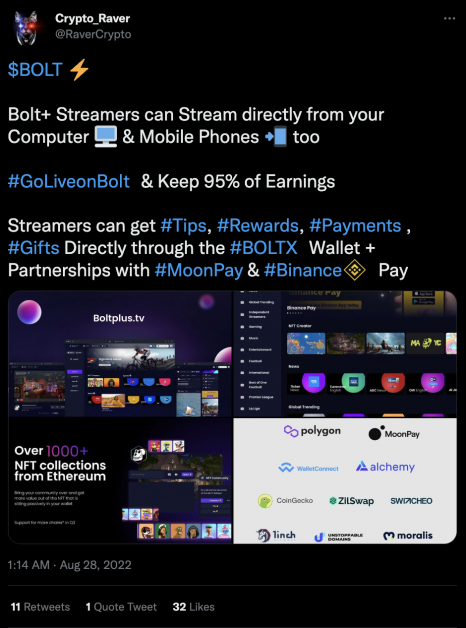 Decred, similar to Litecoin, is a version of the Lightning Network protocol adopted by Bitcoin. What sets Decred apart is that its protocol is based on a code fork of Lightning Network that is specific to Decred, known as the Decred Lightning Network Daemon, or dcrlnd. The fork included various changes to traditional Bitcoin processes, like consensus rules — a Proof-of-Stake layer to enable a new hashing algorithm, on-chain governance, and more.

The Decred fork first gained access to LN in mid-2019, a year after Bitcoin and Litecoin had already integrated the protocol. As such, users are recommended to keep a minimum amount of funds in a Lightning Network channel until the network improves, according to Decred’s official documentation.

This privacy coin, meanwhile, is a $357 million market cap cryptocurrency that is down more than 90% from its peak hit in April 2021.

Raiden is another project that has been working on payment channels. The project allows closed parties or groups of users to open up extra layers for payments between themselves, eliminating fees for each transaction and allowing them way more efficient off-chain payments.

This off-chain scaling solution that enables near-instant, low-fee, and scalable payments is complementary to the Ethereum blockchain and works with any ERC20 token. This makes it easy to make payments between two parties even if they don’t have a channel set up.

However, the Raiden Network requires users to lock up a small amount of their funds to create a payment channel, a problem shared by LN, which acts as the lifetime cost of running a payment channel.

The token RDN’s price, meanwhile, has taken a brutal hit, down a whopping 99.7% from its ATH hit during the last bull market top in Jan. 2018. During this time, the network has been busy building its community by sponsoring the Ethereum ecosystem’s premier event in Europe, announcing community governance, and launching Raiden Forum. In addition, Raiden Network was released on the Ethereum layer 2 solution Arbitrum.

The growing usage of Lightning Network by individuals, businesses, and blockchains make sense, as LN has several advantages.

Ultimately, the Lightning Network has the potential to help cryptocurrency networks scale to meet the needs of a growing user base. Moreover, it could make cryptocurrency usage more mainstream by making it easier and faster to transact.

This shows that LN is a key piece of infrastructure for many blockchain projects, as it allows them to scale without sacrificing decentralization or security. For this reason, LN is…

Dogecoin carbon emissions down by 25% thanks to new Elon…

Read More: Lightning Network is Synonymous Bitcoin – These Blockchains Use it Too

Best Cryptos to Buy Now According to Reddit: What Users Think Are the Best Coins To…

Litecoin is ready for strong adoption in 2023, thanks to these factors at play